​ALL LIVING THINGS HAVE SHOULDERS (2011) 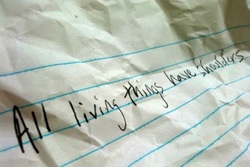 All Living Things Have Shoulders (2011) is the title and text of a poem. The story behind the poem is that a writer found it when visiting a public school, crumpled up in a trash bin. It had obviously been the beginning of a paper for a biology class in which the student had realized that the statement at the top of the page was completely incorrect. Each of the three (3) movements is a retrograde inversion of itself, creating nearly perfect ABA’ forms and an overall ABCB’A’ form. This work was premiered by Emily Kerski accompanied bhy Madeline Greeb at Colorado State University in the Fall 2012.