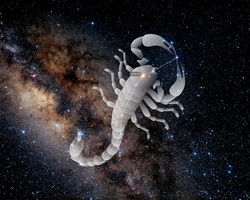 Shaula: The Sting of Scorpius (2014) is a reference to the final star that makes the point of the stinger in the constellation Scorpius. The story of Scorpio is that the great Greek hunter Orion was on a hunting excursion with Apollo and Artemis. While on their journey Orion boasted that he was such a great hunter that he would kill every animal there was to prove himself. Apollo was the Greek God of animals and was so upset by this threat that he created Scorpio, a giant scorpion, to kill Orion. In one version of the tale the scorpion kills Orion, in another Artemis accidentally shoots Orion with an arrow trying to defend him from the scorpion. Both Orion and the giant scorpion were preserved in the stars by Zeus to remember their great battle.

I was inspired to write this piece after attending a Colorado Symphony Orchestra performance of only Claude Debussy works. In that spirit, the piece uses only the notes and harmonies found in the whole-tone scales, starting in E whole-tone and ending in D-flat whole –tone.