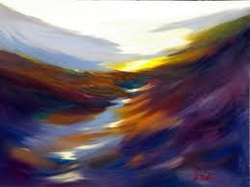 Dream Spaces (2013)
Text:
Darkest Night and Deepest Sea,
Intertwine to create a Tapestry,
Upon which only Perfection will be Painted.
Dreams.
-Alex Buehler

The poetry for this music was written several weeks prior to beginning the musical process. I had actually forgotten that I had written it until I found it in a notebook one day. I wanted to evoke the unusual rhythmic pattern and verse scheme used in the poem which I did through the distinct sections that can be heard in the music. I also desired to express the idea of dreaming through music before the end of the piece, which is the first place where the word 'dreams' appears. To do this I used a music idea from India that is similar to our western whole tone scale, known as the silendro scale. This tonality presents a sense of drifting and floating through the music with no sure settling point and I try to evoke that strange sense of being in a dream, the idea that something is off but you are not quite sure what, throughout.